I’m ashamed. I am embarrassed. I am not wearing any pants.

I’ve thought long and hard for a good 2 minutes about how to handle this and have decided not to sacrifice my May Blogging Challenge, but simply explain myself in the only way I know how. Dawson’s Creek: 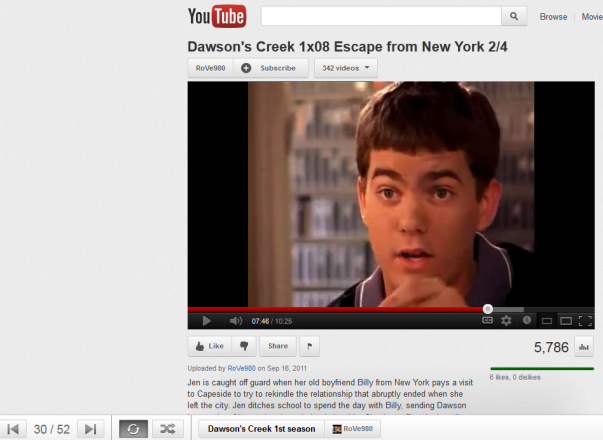 I’m in love with Dawson and his creek, although I could use a little less Dawson and a little more creek if I’m being honest. My true love is Pacey.

Pacey Witter/Joshua Jackson/Charlie from Mighty Ducks was the first teen idol poster I Skotch-taped to the back of my bedroom door. Distinct memories of my 6th grade self talking to him and kissing him goodnight might embarrass most people. But in my case I’m simply using them as explanation for my lack of literary prowess today.

All the ladies (and some boys) will understand.

Posted in ramblings about writing

Today is the best day of my life. It marks the anniversary of an event that would result in the most intense, passionate, wild-eyed, manic depressive sort of love I would never actually experience in life.

In the past week, amateurish publications like Time, Newsweek, and Rolling Stone have demonstrated their ignorance of Bob Dylan. They pretend to understand the clout of his God-like perfection when “honoring” him with their long-winded articles about his “prophetic lyrical genius” and “legendary presence” in the music industry. 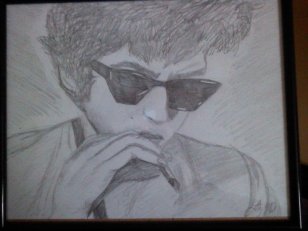 In my spare time, I draw pictures he will never see! *giggle* Isn’t he cute?

Naïve in their feeble attempts to encompass Bob Dylan.

Pathetic in their ignorance of the fact that no matter how many pages and words they use to write a tribute to him, they will fail. Yes, fail to do him justice. You want to know why?

Because I am in love with Bob Dylan.

None of them understand him the way I do! None of them feel their heart flutter when they overhear a co-worker mention her grandson Dylan and his recurring toe fungus. None of them spent hours researching home made bomb recipes when Nick Jonas said that Bob Dylan can’t sing on national television. They do not know my Bobbykins, and they do not know love the way that I do.

Some of you – many of you – most of you are probably checking Craigslist Classifieds and Casual Encounters right now for a used but sanitary straight jacket to put me in. You will tell me I am sick, perverted, psychologically disturbed for wanting to bone a 70 year old man. But, there is a select population that will understand the intensity I feel in my heart and in my loins. Which brings me to our next category:

People who are victims of intense, unrequited, celebrity love and those who are not.

Many consider this sort of severe infatuation a cute phase that a young girl goes through during a segmented period of her life. A time when no real boy wants her and the only way she can feel emotionally and sexually satisfied is by making out with the back of her hand and imagining David Cassidy’s lips on hers. I am here to tell you, that is just a lie.

Ladies and gentlemen, stalker-like celebrity obsession is a prevalent part of regular adult life. Look around you and I guarantee you will find at least one, highly functioning adult who lives among the rest of us, struggling with this debilitating frustration of the heart.

This is not something a person simply “grows out” of! If anything it becomes worse overtime. What starts as an 11 year old girl’s cute habit of doodling Mrs. Justin Bieber all over her underwear, will turn into a 17 year old girl getting her boyfriend Sid’s name tattooed on her nether regions. This is a serious matter the divides the population of the world, person by delusional person.

Take a look at this future “16 and Pregnant” star!

Of course, not all individuals will experience such emotional turmoil. I am the only one of

my siblings who has ever experienced this. For years 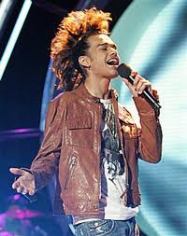 Was THIS worth international public humiliation? WAS IT?

I felt alone… scared…helpless in my pursuit of real, live, human love that could replace the feelings I have for my little Bobsters. It wasn’t until I saw  this chick, a desperate, pathetic excuse for a human being, sobbing over infamous American Idol contestant, Sanjaya, that I realized I am not alone.

take a look at this freak!

Recent studies by a team of vague and unspecified researchers indicate that 1 in 5 adults suffer from what is known as Compulsive Celebrity Infatuation Disorder (CCID). Symptoms include manic and irrational behavior (as seen above), isolation from friends and family members who do not appreciate or understand the depth of your pain,  and the occasional loss of bowels, though that has yet to be backed by any legitimate research.

As a long time sufferer of CCID, I have struggled with my attempts to connect with those who have not been cursed with this condition. I have joined bowling leagues, established knitting circles, and participated in Calligraphy workshops, only to be ridiculed and looked down upon by the other sort. The sort that mocks, judges, and belittles my love. The sort who has never, and will never experience this kind of duress.

So today I ask all CCID sufferers to stand tall and stand proud. YOU ARE NOT ALONE! Remember, admitting you have a problem is the first step to recovery. You are one blog comment away from a potentially normal life full of unhealthy, emotionally damaging relationships.*

Today is not only the most important day in human history.

But it is also the first day, of the rest of your life.

I love you all, you sick, twisted, psycho freaks.

The girl you want to be reincarnated as

*OKAY…let’s be honest. Commenting on this blog won’t help you. You will always be a puss-filled sore on the lip of society whose pathetic obsession with the unattainable will continue to be mocked and disparaged for years to come. You are probably better off sticking with your sick delusions than facing the fact that you are entirely undesirable and no one loves you. Just so we have that clear.

I still appreciate comments though!

Posted in Bob Dylan related ramblings, two sorts of people in the world