It was as hot and sticky as an X-rated theater on the kind of evening when you relinquish your body issues, accept your stretch marks and bacne as character-building tools, and lie naked on the kitchen floor because tiles are surely cooler than Berber carpeting.

I had just moved into a new apartment after the demise of a damaging and over-priced marriage. Still in my ultra feminist, “I don’t need a man and since my underwire broke I might as well burn this bra” stage, I was feeling confident in my abilities to master things I had previously left to the opposite gender. I had changed the batteries in the fire alarms all by myself and supervised my father as he installed a new toilet seat.  If it weren’t for my well-endowed form I could have been mistaken for a man.

Having just finished hanging my last Bob Dylan poster, I was rewarding myself with excessive quantities of peanut butter and jelly saltine sandwiches – a perfect excuse to open the fridge and feel the cool gust of the electronically-produced, climactic heaven contained inside. I was settled comfortably on the kitchen floor, shrouded in my nakedness when I saw it.

A gangly, furry, hemorrhage-inducing spider clinging to the corner

of the ceiling and the wall, its eight limbs, the forceps of evil personified.

A wave of panic coursed through me. A spider? A SPIDER? Really, God? A failed marriage, a radically bloated anatomy, an appalling American Idol finale, and now a spider? What kind bulls*** is this?

I slid up the wall, my bare back sticking uncomfortably to the glossy paint. It wasn’t moving. I tip-toed toward it with the speed of a clay-mation turtle, temporarily paralyzed as I often am when confronted by creatures that disgust me, like neo Nazis or born again Christians. Testing the waters to determine what kind of personality I was dealing with, I tapped a wooden spoon on the wall a few inches beneath the beast.

I backed away from the wall and paced the kitchen. This was a serious situation. A situation that would test not only my faith, but my new found masculinity.

I knew I had to either kill it or scoop it up with a piece of paper and put it outside. But ten minutes passed and I was still being controlled and manipulated by this self-serving prop of Satan. It was getting late and I didn’t want to stay up any longer waiting for my testicles to descend, so I made an executive decision.

So I did just that. I walked away. I got ready for bed, nestled under my sheets, and slept though the occasional sensation that something was crawling on me did disturb my slumber more than once.

A few weeks later I spotted the crumpled, rigor mortise, remains of a faithfully departed spider on the floor of my unused second bedroom. Out of respect and unapologetic laziness I left it there. Now, 10 months later, as dust collects on its vestigial limbs, I realize that most people would have not only taken care of this matter the second they were faced with it, but would not allow this sort of madness to continue for a second summer.

I, evidently, am not most people. Which brings me to the next categorical segregation of this entirely useless blog:

People who kill spiders and people who ignore them and pretend they will go away on their own.

I am confident that I am in the vast minority here. In fact this posting may help me eliminate some unwanted Facebook friends and birthday present recipients. But that’s ok. Because you know what, people? I have no shame. That’s right. NO shame.

I do what I do. I let all kinds of wildlife infest my apartment and I don’t think twice about it. I’m sure there is some sort of psychology behind this behavior, involving the avoidance of unpleasant things and eating your feelings. But I don’t care.

You can judge me as you like, because I judge you too! I judge anyone who could kill a spider and heartlessly crumple its body in a paper towel, or paralyze it with hair spray as a certain family member of mine has started to do. 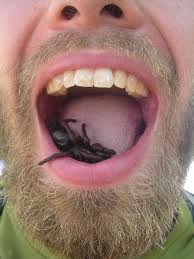 Why can’t we live in a world where we do not kill and wreak havoc upon these armpit hairs of Mother Nature but instead welcome them into our homes and hearts?

Ponder this, my children. Feedback regarding this topic and my mental health is always appreciated.

Peace be with you.

The girl who wears bleach-stained clothing in public

***In an effort not to offend any female readers, I do realize that most women and men go through life with an equal amount of spider/insect related deaths on their conscious. Referencing my weak femininity was simply a literary tool that I used to salvage my lack of imagination.

As children, myself and my siblings took great pleasure in this gem of film making. I encourage all parents reading to put this on the TV play list for your children the next time you go clubbing.

Posted in two sorts of people in the world